Who doesn't enjoy a good scrap? Well, there's a bit of a humdinger taking place at the moment between the never-knowingly subtle M.I.A and New York Times journalist Lynn Hirschberg. Basically, the New York Times magazine ran a fairly scathing 8,000 word piece on M.I.A in which Hirschberg repeatedly framed the Sri Lankan-born rapper as some massive hypocrite. This reached it's zenith with an extended paragraph in which M.I.A describes the injustice of the world whilst ordering some fancy Truffle-flavoured chips (Trufflegate as it has now become known online). M.I.A initially retaliated by posting the journalist's phone number on Twitter, which she wasn't too happy about, obviously. 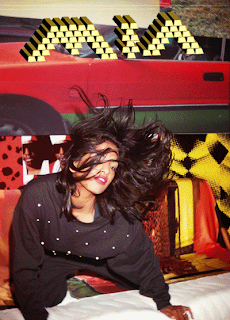 Well, M.I.A has since posted recordings from the interview which show Hirschberg ordering the chips, not M.I.A (LIKE THAT'S THE MOST IMPORTANT THING HERE!). To be fair to the singer, she does acknowledge this fact and also posts other recordings and links to previous New York Times pieces. The best thing to come out of all this, however, is a brand new track that sees M.I.A spitting fire in Hirschberg's direction. 'I'm A Singer (Haters)' is a brilliant drip-feed electro monster that rides a massive sample of Various Productions' 'Hater'. In the song, M.I.A mentions how journalists shouldn't be thick as shit, goes on a bit about politics ("Lies equals power equals politics") and also seems to refer to Hirschberg as "racist". This could run and run.