Bludgeoned to death with a baseball bat

There's much to hate about Jo Whiley - that voice, her fawning over every new band as if they were the second coming, creating Fearne Cotton - but perhaps her biggest sin is the legacy of The Live Lounge. For those unfamiliar with the concept, let Musick enlighten you; basically, every week a band or singer arrives at the Radio 1 studios ready to "revamp" and "re-contextualise" a current hit single. So, for example, Scouting For Girls will rock up, play their new single and then deliver an irony-free take on 'My Humps' by The Black Eyed Peas and the general public go, "wow, I didn't realise how good that song was until it was stripped back and delivered by an earnest Tory-boy with a weirdly sexist take on relationships". 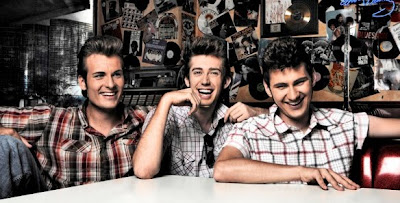 This new-found love for the 'unexpected' cover version (they're usually so fucking obvious it hurts) has reached some kind of nadir with the following act. They call themselves The Baseballs, dress like twats and record stupifyingly terrible covers of recent chart hits (usually by women) that aren't even interesting on first listen and then get knuckle-nawingly shit should you have the misfortune to hear them again. For some inexplicable reason their cover of Rihanna's 'Umbrella' has reached over 8 million hits and nearly all the comments say ridiculous things such as "LOL OMG, this is, like, so much better than the original. Rihanna sukz and The Baseballs vintage take on a modern classic really brings out the soul in what is already a rather sweet song about being there for someone. Or summink".

This band are huge in Germany...